My beloved companion, best friend and sleeping partner, Ratu, a fourteen – year old, small male fluffy dog, decided he didn’t want to relocate with me, and, within a week of developing coughing symptoms, passed away. I had sold my house, and to prepare him for his new location, had taken him to spend a long weekend at the ocean front rental accommodation we were to live in. He had seemed happy there. I was mistaken. Heartbroken, without time to grieve, I packed up a life-time of goods and chattels, sorting out and giving away whatever was no longer needed for the next phase of my life.

Vacating my house with mixed feelings of grief, sadness and anticipation, I began my new interstate adventure.

Storing my furniture in south-east Queensland, I drove to the New South Wales rental destination with two friends – all three cars filled to capacity with necessary equipment. After three days of cleaning house and unpacking, we sat on the veranda, relaxing.  A small miniature poodle appeared from nowhere, jumped onto my lap and proceeded to lick my face. Overwhelmed with emotion, I sobbed, saying to my friends that I’d like to keep her.  Jumping off my lap she inspected every nick and cranny of the house and satisfied, left. 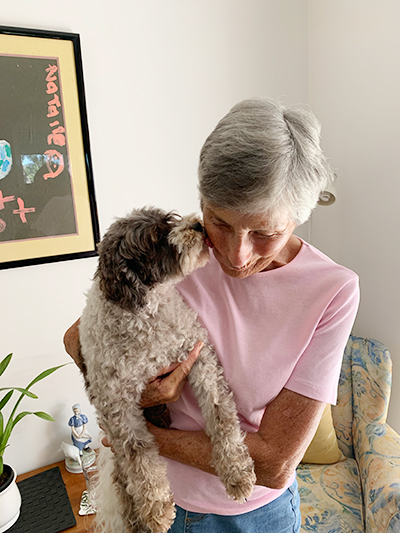 It was weeks before I found out where her owner lived. He was a single father with two children who loved Cookie and didn’t want to part with her. I asked if I could take her for occasional walks and he agreed.

Moving on. Approximately three months later when sitting outside relaxing in the back yard of my rental house, I received a clear and detailed vision. In it, I was inside a bungalow style cabin and, on impulse, walked to the front door. There, on the front door mat, was a special present. Someone had left me a little ‘pip-squeak’ of a dog. She was so cute. I picked her up in my arms and took her into the house, naming her “Pippy”. I wondered at the significance of this vision but didn’t dwell on it.

The rental house turned out to be temporary. What to do? Where to go? I made a firm and immediate decision that I didn’t want to pay rent anymore. It was wonderful living on the ocean front in an isolated fishing village but I wanted to purchase my own house again, closer to my family in south-east Queensland. I chose the hills behind the Gold Coast. Within three weeks of inspecting eighteen houses, I was living in the one I chose.

Completely renovated internally to my taste, the house needed major work done outside. I pined for my little dog, but had far too many practicalities to attend to. I decided to make a clear list of the kind of dog I wanted and would seek – when the time was right. I wanted a non-aggressive, well-trained small female adult dog, a little larger than Cookie, one who didn’t shed hair. I asked my new early morning dog walking friends to keep a look-out for such a dog. About two months later June stopped me on my walk asking if I had found my dog yet. When I said “No” she gave me the phone number of her friend– a dog breeder named Barbara who also lived on the mountain. I called her.  As we were talking she had the strong intuition to offer her mother’s dog to me.  Her mother had passed away around the same time as my Ratu, and she wanted a replacement human Mum for her. The dog she offered, her mother’s special and much – loved pet, had been with her in her arms when she passed. The dog cried for three weeks after her death.  Barbara felt she needed a home of her own with an older human mother rather than living with her on a large property with lots of other small puppies. Pippin is the dog’s name. The breeder’s mother chose her because she was the smallest puppy of the litter, a little ‘pip-squeak’ of a dog she often called ‘Pippy’.

Overwhelmed by the generosity and kindness of the breeder, I couldn’t consider her offer at first.  Because major concreting work around the house was about to begin I asked, Barbara, if I could get back to her when the work had finished.  When it had, I called her and asked for a photo of Pippin. She sent it by text.  Immediately I connected, falling in love with her. She is a chocolate and white labradoodle – a miniature poodle crossed with a small labrador.  I called Barbara saying I’d like to meet the little dog. A few days later, I met her on my front door mat, in the arms of Barbara’s daughter, Elle. We went inside, sat down and Pippin jumped up onto my lap and licked my face.  Overcome, I remembered my vision from seven months ago. I asked Elle if I could keep her.  I held Pippin in my arms when Elle left. She watched her go, making a deep guttural sound I felt was unresolved grief stored in her lungs. Pippin hasn’t left me, nor pined for Elle or Barbara since then. Elle left me with her blanket and kibbles. Pippin sleeps on my bed just at Ratu did. Pippin knows she’s home, with a Mum who loves and cares for her. Now asleep in my, no – in our office, in the new bed I purchased for her, she is completely relaxed, calm and adorable.

I had purchased a new squeaky toy for Ratu about a week before he passed away, and was keeping it to give him as a Christmas present. I carried it with me to my next two houses. It was a third version of his favourite squeaky toy – called “Drooly Dog”. I gave it to Pippy when Elle left.  She loves it. We play with it together.

The magic and power of Spirit never ceases to amaze me, and my gratitude knows no bounds.